Home › Resources › Technical Papers › How to Select A Modular Cleanroom

How to Select A Modular Cleanroom

Selecting a cleanroom for a new business or new product is not as difficult as it may seem. While there are many options and features to consider, focusing on your key requirements will help make the decision making process easier. 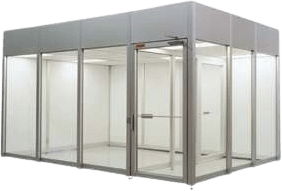 For more information or to
start your cleanroom project

Rules mandated by government regulations, ISO guidelines, or customer requirements are the first key consideration when selecting a cleanroom. For example, government regulation USP797 outlines specific requirements for the manufacture of pharmaceutical products; ISO 14644-5:2004 guidelines specify basic requirements for cleanroom operations. Most often, regulations or customer specifications will dictate the cleanliness level or rating required, which provides a good starting point for choosing the right cleanroom.

Cost is also an important consideration, especially if you’re starting a new business or developing a new product line. Prices can vary greatly, from custom, fixed-wall construction to modular, free-standing, softwall or hardwall cleanrooms. Fixed wall rooms are typically the most expensive, with modular softwall cleanrooms being the most economical. Additionally, size, shape, configuration, and accessories will all affect the overall cost.

The location of your cleanroom within your existing building structure, and the number of processes and workers needed in cleanroom, will determine the size and shape of the room. Cleanroom aesthetics are also important: projecting a high-tech image with visual appeal can help attract new customers.

There are two basic types of modular, hardwall cleanrooms: recirculating and non-recirculating. Your product and process requirements will determine which type of cleanroom is best-suited for your needs.

Recirculating modular cleanrooms recirculate the air within the cleanroom and prevent it from mixing with outside air, providing better control of temperature and humidity. Air is recirculated back to the high-efficiency particulate absorbing, or HEPA, filters located in the cleanroom’s ceiling. This is accomplished via air return chambers built in to the room’s walls or through existing walls of the building.

Most businesses are aware of their cleanroom performance requirements because of customer, industry, or government specifications. These performance requirements identify the cleanroom class level required at a given state or condition. There are three levels of condition (states) for testing and characterizing the performance of cleanrooms: as-built, at-rest, and operational. Specific test methods for these three classifications are outlined in ISO 14644-3:2005.

Most cleanrooms are rated and sold in the as-built category: an empty room with the filter system running, but without workers or production equipment. However, adding workers and equipment will introduce contamination and affect the room rating. A cleanroom may be rated ISO 6 at rest, but ISO 7 during operation (see Table 1).

To comply with performance requirements, the as-built empty room should be tested and benchmarked, followed by testing and documentation of the at-rest and operational states. If contamination in the at-rest or operational states are not in compliance, corrective steps need to be taken. These steps can range from examining the production process and number of workers in the cleanroom to testing the room’s air flow performance.

To ensure optimal cleanroom performance, air flow design and frequency of air changes should be evaluated. Cleanrooms are classified according to the number and size of particles permitted per volume of air in a specific amount of time. There is a relationship between cleanroom class ratings and the room’s air changes per hour. For a cleaner room rating, more air exchanges become necessary. For example, a typical ISO Class 7 cleanroom will have 60 to 150 changes of air per hour, while an ISO Class 6 room will have 150 to 240 changes per hour (see Table 2).

All areas within a cleanroom should have similar air changes during each hour to ensure required performance. For example, a cleanroom with only one air return or exit, located at the opposite end of the room from the fan and filter, will likely produce stagnant air spots. This type of design causes air to flow almost horizontally across the room to the venting location, in a line-of-sight fashion. Areas of inadequate air movement retain higher levels of contamination. Adding or moving air returns will enable a more vertical and even air flow, improving overall air quality. The right balance of filter and air returns must be maintained to create positive air pressure inside the cleanroom. Positive air pressure produces outward air movement, preventing the inflow of contaminants and assisting in the expulsion of particles generated by workers and equipment.

Cleanroom air flow performance can be cost-effectively upgraded by adding fan-filter modules (FFMs). For example, FFMs cover approximately 5 to 15% of an ISO Class 8 cleanroom ceiling; an ISO Class 7 cleanroom requires 15 to 25% ceiling coverage; covering 25 to 40% of the ceiling will upgrade the room to an ISO Class 6.

A variety of accessories are needed to make a cleanroom fully functional: lighting, doors, furniture, changing rooms, etc. Accessories can be selected during the room design and specification phase.

Most cleanrooms have adjacent gowning areas where workers change into special garments to minimize particulate contamination before entering the production area of the cleanroom. Some gowning rooms are equipped with air showers as a method of further reducing particulate