Air showers are self-contained air recirculation systems installed at entrances to cleanrooms and other controlled environments. Since people and products are the main sources of cleanroom contamination, these cleanroom entry systems quickly and efficiently remove particulate contaminants from workers or products before they enter a clean space.

How an Air Shower Works 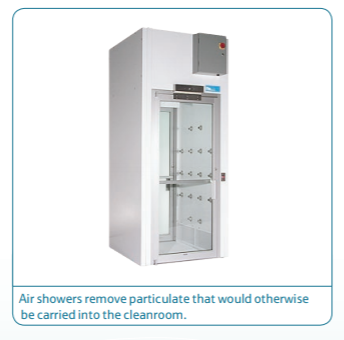 Whether the goal is high semiconductor yields or a flawless paint finish, controlled environments are integral to manufacturing processes. Air showers are vital to maintaining the clean environment; they help protect operations from the constant threat of air particulat 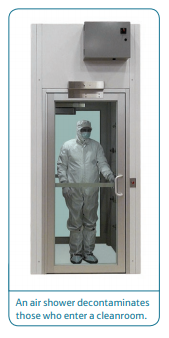 e contamination. Some of the industries that directly benefit from proactive air shower design concepts include:

How to Select an Air Shower for Decontamination Purposes?

Important factors to consider when specifying an air shower include effectiveness (power and capacity) and air filtration.

Power and capacity are the major influences on the effectiveness of an air shower. Cleaning power is determined by nozzle velocity: the speed at which air is pushed through the nozzles. It takes high-velocity air to dislodge contaminants; the higher the velocity or cleaning force, the more contaminants are removed. Conversely, capacity is the volume of air circulated in the system. More air volume means faster cleaning and removal of contamination through the filtration and recirculation system.

To specify the most effective air shower, look for one that produces nozzle velocities of 7,800 feet per minute (fpm) and circulates 1,900 cubic feet per minute (cfm) of air. Velocity is measured at the nozzle, and cleaning effectiveness deteriorates as distance from the nozzle increases.

Therefore, air showers should have a high number of air nozzles positioned as close to the worker or product as possible. Ideally these nozzles should be able to be positioned and removed to allow for easy inspection of the high-pressure supply ducts.

An air shower’s recirculating air filtration systems typically use two sets of filters. The first is a pre-filter for catching the bulk of contaminants. The second is a high-capacity, 99%-efficient HEPA filter.
System blower units are usually mounted in the ceiling. If your facility has height restrictions, make sure the blowers can be mounted on the external wall. For easy routine maintenance, pre-filters should be changed regularly. Replacement filters are economical and easy to change.

Utilizing a 90-degree design, users enter on one side and exit to the right or left at a 90-degree angle. This allows the air shower, with nozzles on two opposing walls cleans workers with ease. In This configuration has fewer air nozzles than the straight-through design and requires the worker to turn 360 degrees to ensure that they’ve been thoroughly cleansed. Other designs may have double doors or even three doors for entry and exit. Configurations include cart/parts-cleaning air showers, which are used for carts, conveyors, pallets and continuous-part operation. Low-profile air showers accommodate facilities with ceilings less than 96 inches. ADA air showers are sized so a wheelchair can turn around in the air shower.

The number of people that need to enter your cleanroom in each amount of time will have a major impact on the size of the air shower and filtration system that is required. Designs range from single batch systems where one person uses the shower at a time, to tunnel systems for larger groups to pass through quickly. Tunnels are becoming more common because of the amount of cycle time needed for a shift change.

Like air locks, air showers have entrance and exit doors that cannot be opened at the same time. Workers enter one side and exit on the opposite side. When one door opens, the other door’s magnet energizes, preventing it from opening. During the cleaning cycle, both doors are energized (locked) to prevent anyone entering or leaving before the cycle is completed.

High-quality air shower shells are constructed of steel and painted with a strong, durable cleanroom-compatible finish. For some medical, pharmaceutical, or extremely wet environments, stainless steel construction is ideal.

Some manufacturers offer economy units made of laminated particleboard. However, this option has major weaknesses, including temperature and humidity fluctuations that can cause delamination. The materials are also easy to damage and susceptible to joint loosening. Any of these conditions may generate particulate or biological contamination. 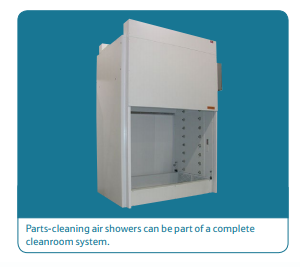 Contact us for more information regarding cleanroom air shower specifications and the best ways on how to select an air shower, or request a quote for further pricing details today.
Featured Product